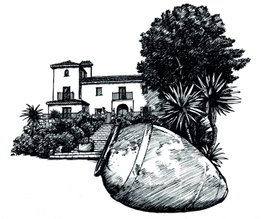 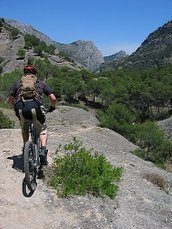 Biking is not the national sport in Spain (that is bullfighting), but it looks like that during the weekends. La Urraca is located in Sierra de las Nieves, which is a very popular biking area for both mountain and road biking.

There are several trails around the house and we have the necessary maps and GPS to loan. We can help you to arrange shorter and longer trips, with or without an outdoor lunch.

If you want some serious mountain biking, we will recommend the El Chorro area, with or without a guide. It is a very popular area both for biking and hiking. This is a very different Spain than Costa del Sol, with mountains, valleys and lakes. It is  absolutely stunning and only 20 minutes from La Urraca. We have several partners that rent out all kinds of bikes, if you don't want to bring you own. 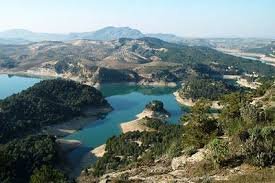 In Spain horseback riding is culture. The Spaniards are proud of their Pura Raza Espanola or Andalusian horses. Don’t be surprised if you find Spanish men riding to the bars for tapas and drinks in the weekends, and dressing them up for festivals.

Do you want to experience scenic Andalusia from the horseback, our partners can offer everything from 2-3 hours to a full day ride, incl. picnic. You need to book in advance.

The tours are varied with walks over mountains and wonderful gallops through pine and olive woods.

If you want to ride, bring your riding boots and helmets and experience Andalusia in the best possible way. 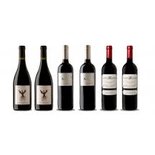 Spanish food and wine does not need any further introduction – a mature Rioja or Ribera del Duero , or what about a bottle of albarino from Galicia, together with Jamon de Iberico, a spicy chorizo and some olives from the local farmer? Can it be any better?

At La Urraca good food and wine is a big thing. We are believers that a good life is strongly connected to excellent food and wine.

We can arrange food and wine nights, with i.e. wine and olive tasting, and we can also make food together with the local chefs if we wish.

We have both an indoor and outdoor kitchen at our disposal. The meal will be enjoyed in the patio under the olive tree.

For those of our guest that want a day or two at the beach, we know a few nice places between Malaga and Marbella we can recommend – party beaches, naturist beaches and family beaches.

You can either take your car down to the coast or the train from Pizarra to Malaga.

A typical stay at La Urraca 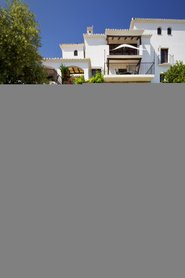 At La Urraca we strive to give our guest an excellent and unique experience. We treat you as individuals and will tailor made your stay per your wishes and needs.

A typical day starts with breakfast at the farm, and then some of you may depart for some hiking in the mountains, moutainbiking or golf. Some of you may just want read a book by the pool.

You may have lunch at some of the local restaurants and return to La Urraca in the afternoon for a few hours of relaxing in the patio or by the pool. You can either have dinner in Casarabonela or we can serve you homemade food at La Urraca. The choice is yours.

Spain is not for most of the tourists coming here first and foremost known for mountains and hiking, but its beaches, sun and party. Andalusia, is much more than that. Only 30 minutes from the coast you will find woods, mountains, and beautiful valleys. Just behind La Urraca you will find mountains 1500-2000 meter high. The area is ideal for hiking – both short and full day trips. We have mapped out some of the routes, and have maps and GPS you can borrow from us. We will be happy to guide you, we may even bring a backpack with lunch.

Caminito del rey, is one of Europe’s most popular tourist attraction, and a “must do” when visiting La Urraca. It is located in El Chorro and is a 2.9 km long trail. It is newly renovated and the walk is easy and you don’t need a harness anymore. The trail is 100 meter up in the mountain side and through a ravine. It is a spectacular experience. The whole trip takes on average 4 hours and is in total 10 km, included the walk to the access point.

You should book tickets months in advance. Take contact with us, and we will help to organise it for you.

Check out www.caminitodelrey.info for more information

La Urraca is not a classical golf resort, but it is many excellent golf courses in our surroundings. Costa del Sol is only a 30 min drive away. The district has over 60 golf courses, and the nearest one is 30 minutes from La Urraca. Early spring and late autumn is perfect for golf in this area.

For more info check out  www.guadalhorce.com or www.alhauringolfclub.com. It is necessary to book tee time in advance, especially in high season (spring and autumn). In the summer there is less players and cheaper green-fees.

The Grand Cities of the region 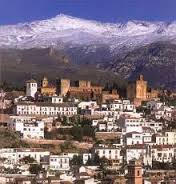 For those of our guests that is keen on shopping, art, history and culture – Malaga and Marbella is only 30 min from the farm. Here you can combine the urban puls with an afternoon at the beach.

In Malaga, you will find the old city with classical Spanish plaza, alleyways, coffee shops and restaurants. The harbour area is now been modernised with a nice park, restaurants, and areas just to relax. Malaga is a relatively big city with 600.000 inhabitants, but the city centre is quite small and there is walking distance to most of the “must do's”. The City has also a Picasso museum.

Granada and Alhambra is less than 2 hours from La Urraca. Granada is one of Europe’s most exciting cities when it comes to history, architecture and culture. Granada is first and foremost known for the old Moorish palace Alhambra, but you will also find magnificent architecture from the period after the Christian re-conquest of Spain in 1492. In the old part of the city you will find unique Spanish architecture from both the period before and after 1492. If you like to visit Alhambra, you need to book well in advance, especially in the high season.

Cordoba is a two-hour drive from La Urraca, and the same goes for Sevilla. If you take the fast train, you can even do Madrid in one day. 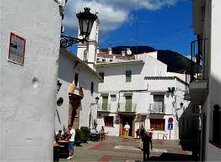 It is not only the grand cities that is worth a visit. La Urraca is surrounded by classical medieval white villages, like Alora, Alhaurin Grande, Ronda and Istan, just to mentioned a few of them. Our own village – Casarabonela is only 5 minutes away. It is a traditional Spanish village far away from the touristy coastline, with a charming square and a few restaurants. The village resides in the hillside and the view is magnificent.